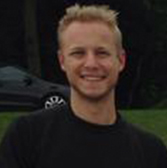 Ryan Barth (RJB), got his start in Pro Outboard Boat Racing. After several year racing along side his father and sister, Ryan made the switch to formula cars with the help of Fred and Tom Edwards.